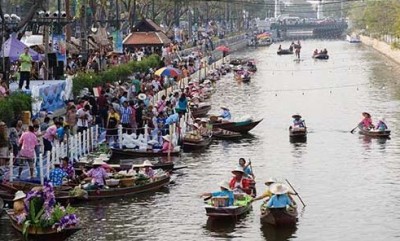 Bangkok (Thailand) February 13, 2015 – The Tourism Authority of Thailand (TAT) is inviting local and international tourists to visit the country’s newest attraction, the Khlong Phadung Krung Kasem: The Bangkok Floating Market, which opened yesterday under the initiative of Prime Minister General Prayut Chan-o-cha that calls for the preservation and promotion of Thai traditions and culture including the traditional riverside way of life.

TAT Governor, Mr. Thawatchai Arunyik said, “Khlong Phadung Krung Kasem: The Bangkok Floating Market offers a glimpse of what life in the Thai capital was like back when canals were everywhere. Waterway and riverside communities were the symbol of Bangkok that was also known as the “Venice of the East” during much of the 19th century. NowadaPhadungys, waterside communities continue to thrive in certain parts of the capital and the Central Region.”

The “Khlong Phadung Krung Kasem: The Bangkok Floating Market” is showcasing delights of Thai arts and crafts, souvenirs and delicacies from six floating markets and five land-based markets from Bangkok and the neighbouring provinces.

The event is taking place daily from 12 February – 1 March, 2015, at Khlong Phadung Krungkasem and areas near Government House from Orathai Bridge Phadung to Makkhawan Bridge in Bangkok’s Old Quarters or known as Rattanakosin Island. The Floating Market, featuring 60 boats, will open from 15.00-20.00 hrs. and the 80 stalls on land will open from 11.00-20.00 hrs.

TAT Governor said, “While enjoying the sights and sounds as well as taking part in the event’s cultural and fun activities at the fair, visitors can sample traditional Thai foods and delicacies, including boat noodles or kuai tiao ruea, one of the favourite Thai dishes synonymous to all of Thailand’s floating markets. Visitors can also shop for Thai crafts and souvenirs that are still made in the traditional way.

Throughout the 18 days, the event will feature a host of traditional activities including special wooden-boat races andMuay Talay (sea boxing) matches, and a boat tour of the historical sites along Khlong Phadung Krungkasem. On land, there will be displays of Thai arts and crafts made in the traditional way; such as, fancy kites and replicas of Thai wooden boats, and an exhibition highlighting the story of Khlong Phadung Krungkasem. Traditional Thai music and cultural performances will take place twice daily.

The festival area can be easily reached by public transport including buses and taxis. For visitors using Bangkok’s thriving mass transit systems, they are advised to get off at the MRT Subway Hualampong Station, and continue the journey to the fair by taking the complimentary shuttle boat services that are available daily from 11.00-19.00 hrs.