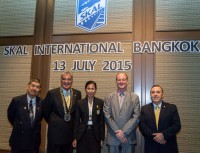 Bangkok (Thailand) – July 14, 2015 – Thailand’s tourism future lies firmly in quality, not quantity. That’s one of the key messages to emerge from a presentation given by the Kingdom’s Tourism Minister Kobkarn Wattanavrangkul to members and guests of Skal International Bangkok.

The Minister, welcomed by Skal International Bangkok Dale Lawrence, said that she was promoting a policy that from 2016 would focus upon attracting higher spending international visitors to Thailand – thus dropping the annual policy of simply targeting a greater number of tourists than the previous year without due consideration to the length of stay and average daily spend.

The Minister added that some Baht 2.2 trillion was expected to be generated in tourism revenues in 2015 and that a key strand of the government’s policy is to achieve greater distribution of wealth throughout local communities. “I want to see income from tourism going much deeper in the community,” she said.

The Minister also pledged to improve the system of multiple entry visas and to provide a better immigration service at major arrival points such as Suvarnabhumi airport. She recognised that the well-publicised scams on tourists in Thailand needed tackling and said that action was being taken.

Khun Kobkarn also noted the concerns of Skal members about the proposed dolphinarium in Phuket and was planning to discuss the matter with government colleagues. The Minister, mindful of her dual portfolio (Tourism and Sports), said that Pattaya and Phuket were being earmarked as centres of sporting excellence.

In a separate briefing with Skal Bangkok President Dale Lawrence and members of the Skal Executive Committee, Khun Kobkarn Wattanavrangkul pledged her full support to the club’s bid to host the Skal World Congress in Bangkok in 2017. Voting takes place at the 2015 World Congress in late October.