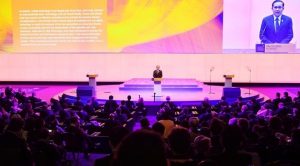 The appearances of both the Thai Prime Minister and the Deputy Prime Minister at this flagship global private sector event signify Thailand’s commitment for the development of the tourism industry, the kingdom’s largest export.

“I am proud that Thailand has been selected to host one of the world’s most important international tourism conferences. This reinforces Thailand’s readiness to host global conferences in addition to its potential to be a leading travel and tourism hub in Asia and the world,” added General Prayut.

Hosted by the Ministry of Tourism and Sports and the Tourism Authority of Thailand (TAT), this is the first time that the WTTC Global Summit has been held in Southeast Asia. This year event was also attended by Ministers in the tourism and related fields from 13 nations as well as Dr. Taleb Rifai, Secretary-General of United Nations World Tourism Organization (UNWTO), alongside more than 800 delegates from 58 countries.

To mark the summit’s first time in Southeast Asia, TAT pulled out all the stops to make the event successful and to reiterate Thailand’s positive image as a top tourist destination by showcasing some of Unique Local Thai Experiences at the welcome gala dinner on 26 April and the two specially-arranged post-event tours, the Rustic Thailand and Bangkok Medley Tours, on 27 and 28 April 2017.

WTTC reported that Thailand is among the top 10 for the long term tourism growth in the world.