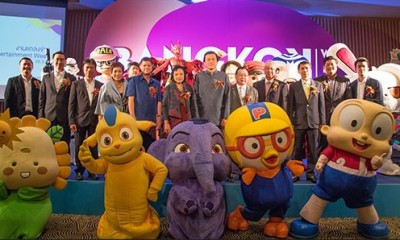 Bangkok (Thailand) – March 27, 2015 – Thailand is staging the “Bangkok Entertainment Week” from 27 April to 3 May, 2015 to promote the Thai capital as a hub of entertainment business in ASEAN. The week-long event is to transform Bangkok into a city of happiness filled with fun and colorful entertaining events to creatively add value to the economy and business through a variety of digital contents from all over the world.

Bangkok Entertainment Week is a product of the coordination between the public and the private sectors to ensure grandeur while strengthening the entertainment and digital business of Thailand to secure its place on the international stage.

Bangkok Comic Con 2015 x Anime Festival Asia Thailand 2015, to be held between 30 April and 3 May at Bangkok International Trade and Exhibition Center (BITEC), is considered the grandest in Asia with top pop cultures from Hollywood and Japan combined in one event.

There will be special shows from Warner Brothers, Twenty Century Fox, to name only a more prominent few. Exhibitions of major production houses from Hollywood are among the highlights of the event, in addition to a big gathering of important figures in the movie industry, animation industry, as well as producers, directors, special effect specialists, etc.

Another important highlight of the event is an appearance of Michael Uslan, producer of all Batman movies, and “Pop Mhan” (Kotchakorn Mhanojyakorn), a Thai artist who creates superhero animations for various major companies in the United States.

Visitors to the event will also be mesmerized with many mascots from overseas, newest shows from the full team of Ben 10 Omniverse, and all those Teenage Mutant Ninja Turtles who are going to be in Thailand for the very first time only at this event. Also awaiting visitors at this event are the anisong concert from Japan, Cosplay contest, and sales of licensed souvenirs and collectible items made exclusively for this event.

Bangkok International Digital Content Festival 2015, to take place between 27 April and 3 May at Centara Grand Hotel at Central World and Bangkok International Trade and Exhibition Center (BITEC), is to accommodate the government’s policy to drive forward the country’s economy by promoting the Thai entertainment, culture, cartoon, and animation contents in the global market.

Interesting activities will be conducted for various groups of interested parties including for the business operators, entrepreneurs, professionals, students, and consumers, etc. Business matching with overseas partners will be held, as well as exhibitions of creations of renowned Thai entrepreneurs such as Sheldon, Bloody Bunny, Pang Pond, etc.

Workshops and seminars will be organized to disseminate knowledge and generate inspiration by renowned guest speakers from abroad such as Weta Studios, producers of the Lord of the Rings Trilogy and The Hobbit. This event will also be seen as a stage for Thai entrepreneurs to promote their new products in the market. There will also be studio visits for overseas entrepreneurs to get to know famous studios in Thailand.

Thailand Comic Con 2015, to be held from 30 April to 3 May at Royal Paragon Hall, Siam Paragon, is set to boast the most comprehensive contents of pop cultures including movies, animations, dramas, music, games, toys, collectible items, demonstrations from manufacturers and entrepreneurs, and displays of special products.

There is a zone reserved specially for the meeting between consumers and manufacturers and between Thai manufacturers and manufacturers from overseas. Visitors can get up close and personal with game directors, creators, and renowned artists from abroad, as well as popular mascots from Thailand such as Kan Kluay the elephant, Echo, and Japanese mascots including Dr. Slump and Arale, Shin Chan, etc. Other fun and interesting activities are also to be held during the event.

Thailand Toy Expo 2015 will be held on April 30 to May 3 at Central World Shopping Center. During the expo, more than 70 popular brands of toys and collectible items from the United States, Europe, and Asia will be on displayed. An exhibition of limited edition toys will be organized.

More importantly, new prototype toys manufactured by several brands from overseas will be launched for the first time in the world during the event. Other interesting activities during the expo include a visit of world-renowned toy designers from different companies all over the world, a launch of new brands of toys by Thai manufacturers, sales of products of leading toy companies at special prices, and a bidding of toys to generate donations for education of underprivileged children, among many others.

The expo is organized in the same scale as those previously held in Japan and Hong Kong, and it is expected to become a world event just like the San Diego Comic Con International in USA which can attract as many as one million visitors each year.

This major event is also considered a stage for exchange of academic knowledge, as well as an effort to stimulate generation of creativity leading to sustainable creation of economic and commercial values, which is in line with the government’s concept of digital economy, as it is believed that Bangkok has the needed capacity to become a major organizer of entertainment mega events to satisfy both the businesses and the consumers. It is also based on the belief that Bangkok would become the centre of digital contents in the ASEAN community with potential for continuing growth in the years to come.