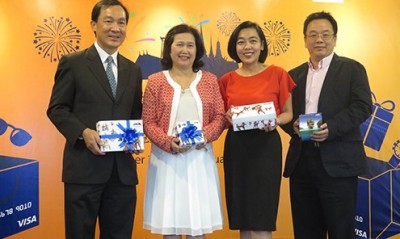 Bangkok (Thailand) – December 4, 2014 – The Tourism Authority of Thailand (TAT) is joining hands with Visa and the Ratchaprasong Square Trade Association (RSTA) in launching the second ‘Thailand Spectacular Year-end’ shopping campaign to offer special perks, privileges and gifts for visitors to Bangkok during this festive season, from 22 November, 2014 to 31 January, 2015.

Mrs. Vilaiwan Twichasri, Deputy Governor for Tourism Products and Business of TAT said, “The Spectacular Year-end shopping celebration is being held in the Ratchaprasong area because of its status as the preferred location for foreign visitors and locals alike for shopping as well as for the New Year Countdown.”

The two-month shopping extravaganza entitles overseas Visa cardholders to enjoy exclusive discounts and privileges at hotels, restaurants and shops in the Ratchaprasong area, the shopping heart of Bangkok. Discounts for rooms are also available when booked from respective websites of hotels within the area. The same privileges are extended to many of the world-class restaurants at these hotels.

Eligible shoppers are also entitled to redeemable gifts, ranging from Thai silk scarfs, silk neckties, passport holders, mini iPads, mobile telephones and watches. Visa cardholders who spend 5,000 Baht or more on goods and services from one of the many shopping malls in the Ratchaprasong square mile will have the chance to redeem gifts at two Spectacular Year-end booths located at the Gaysorn’s entry at the BTS Sky Train Chit Lom Station and the proximity of the Erawan Bangkok Shopping Centre.

Thailand-Spectacular-Year-End-1Mr. Somboon Krobteeranon, Visa’s Country Manager for Thailand said, “This campaign is a good example of how Visa can connect millions of its cardholders travelling to Thailand with businesses in ways that benefit all. Tapping into Visa’s deep knowledge of cross-border travel, we are taking into consideration the whole customer journey and have put together special privileges that will delight visitors, starting right from when they book their accommodation. We are expecting a 15 per cent increase in spending on Visa cards in the area during this festive season.”

Visa is promoting the campaign among its cardholders in Thailand’s top inbound countries, including the US, UK, Japan and Australia, as well as growing source markets; such as, Russia, China, and South East Asian countries.

Ms. Nattaporn Chevamongkol, RSTA spokesperson said, “The Spectacular Year-end 2014 shopping celebration will go hand-in-hand with the ‘Ratchaprasong Winter Sale 2014‘ campaign for locals, offering up to 80 per cent discounts on over 100,000 goods and services including special dishes from leading hotels and restaurants in the Ratchprasong area.”

In addition, RSTA together with TAT and the Bangkok Metropolitan Administration (BMA) will turn the skywalk from the BTS Sky Train Chit Lom Station to CentralWorld, into a selfie-inducing “Hanging Garden of Lights” from 5 December, 2014 to 5 January, 2015, to enhance the area’s reputation as the place for the New Year Countdown.

This year “Bangkok Countdown” at the Ratchaprasong area is scheduled to take place at event grounds in front of CentralWorld and Amarin Plaza. Hotels within the area are also organising their Countdown celebrations.