Thailand’s Golf Tournament of the Year 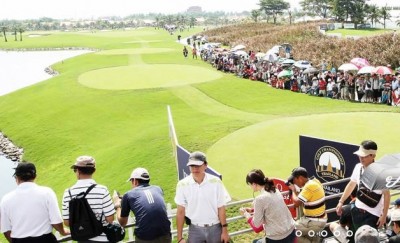 Amata Spring Country Club (Thailand) – December 10, 2014 – One of the most prestigious golf events in Asia-Pacific and the flagship tournament of the Asian Tour, the “Thailand Golf Championship 2014″ is to return to Amata Spring Country Club, Chonburi, from 11 to 14 December, 2014. Featuring a host of world-class players, including defending champion Sergio Garcia, two-time Masters champion Bubba Watson, two-time major winner Martin Kaymer, South African legend Ernie Els and Ryder Cup starts Lee Westwood and Victor Dubuisson, the stage is set for a thrilling week of action of the highest caliber.

Two of the Europe’s most consistent performers will be looking to end 2014 with a bang at next week’s Thailand Golf Championship, which takes place at the award-winning Amata Spring Country Club.

Englishman Tommy Fleetwood and Bernd Wiesberger of Austria, who between them have recorded eleven top-10 finishes on the European Tour schedule this season , will arrive in Bangkok each with the aim of claiming their first victory of the year.

“The only thing lacking from the past season has been a win,” said Fleetwood, who racked up three runner-up finishes on his way to a career-best 19th place in the Race to Dubai rankings. “But I’ve been feeling happy about my game for a while now so I’m all set for a good week in Thailand.”

Fleetwood, who emerged victorious at the 2013 Johnnie Walker Championship at Gleneagles for his maiden European Tour title, has experienced the Amata Spring course at first hand having played in the 2011 edition of the US$1 million showpiece event. That, says the 23-year-old, will stand him in good stead.

“It’s a great track, one I really enjoy playing. You have you be spot on with your irons because the greens can be tricky,” said Fleetwood of the three-time Asian Tour Venue of the Year. “So I’m looking forward to returning to Thailand. I’m up for the challenge ahead.”

Wiesberger, too, has happy memories of the Thailand Golf Championship – the Vienna-born 29-year-old finished in a share of 26th on his tournament debut last year – and is hoping to recapture the form that netted him two European Tour victories in 2012.

“I’ve had success in Asia before and I always enjoy coming to play in the region so the Thailand Golf Championship is a big week for me,” said Weisberger, who won the Ballantine’s Championship in Korea for his breakthrough victory.

The Austrian, who finished second at the Maybank Malaysian Open and the Lyoness Open in his homeland for his best results of the year, will be buoyed by his performance at the US PGA Championship in August where he played in the final group alongside eventual champion Rory McIlroy.

Entering the last round just a stroke shy of the world number one after playing flawless golf for the first three days, Wiesberger couldn’t keep up the pace at Valhalla, dropping into a share of 15th after a 74 on Sunday.

Being in contention at a major, however, was a great learning experience.

“I was very proud of a lot of what I achieved at Valhalla, especially given I had never been in that situation before,” Wiesberger, currently 72nd in the Official World Golf Ranking, explained. “Although I didn’t play as well in the final round as I would have wanted, I benefitted a lot from the week. Hopefully I can use that experience and go on to achieve more success in the bigger events.”

The tournament is played over 72 holes (four rounds) of stroke play. After 36 holes, the field will be cut to the leading 65 players plus ties

The Thailand Golf Championship Trophy was designed by the renowned Edward Asprey of London, who was so inspired by the beautiful lines and colours of the Thai Royal Crest, that he decided the trophy should have a smooth, tall and elegant form of timeless design, in order to display the Royal Crest to its highest advantage.