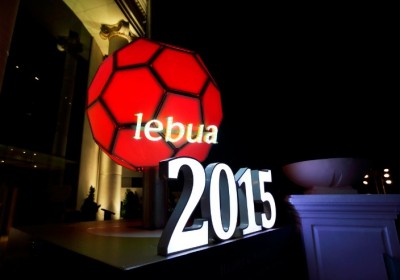 Bangkok (Thailand) – January 1, 2015 – At midnight on December 31st, The Bangkok Ball Drop at lebua once again put Thailand’s capital on the map as a world-class New Year’s Eve destination. During the countdown to 2015, the 7-foot Bangkok Ball dropped 49 feet from above Sirocco, the world’s highest alfresco restaurant. Seen for more than a mile across the city, the ball was the most visible icon in Bangkok for the second consecutive year.

In addition to enjoying the best views across Bangkok, the guests at lebua’s four altitude-defying restaurants and bars – Sirocco, Mezzaluna, Breeze and Distil – were treated to fine cuisine and a champagne reception with the CEO of lebua Hotels & Resorts, Deepak Ohri.

As midnight approached, lebua Hotels & Resorts CEO Deepak Ohri said: “Following the international attention received by the Bangkok Ball Drop last year, we are delighted to host the event at lebua for a second consecutive year. It is set to be an annual event, and the city’s reputation as a New Year’s destination will continue to grow.”

With its incomparable vantage points from which to witness the record-breaking Bangkok Ball Drop, Tower Club at lebua was the ultimate destination to ring in 2015.

Bangkok Ball Drop at lebua Facts & Figures
• Descended from a 15-meter (49-foot) steel pole, situated 266 meters (872 feet) above the ground during the countdown
• 2.1 meters (7 feet) in diameter and constructed of 20 hexagonal and 12 pentagonal steel pieces covered with translucent fabric
• Contains 2,950 LED lights and 50 strobes
• Visible for a minimum of 1.8 kilometers (1.1 miles)
• Weighs 1.2 tons
• Constructed by 50 Thai engineers and craftsmen over a period of 40 days

About lebua Hotels & Resorts
lebua Hotels and Resorts is a growing international luxury brand that operates distinctive hotels, fine restaurants and bars. Led by visionary CEO Deepak Ohri, Bangkok-based lebua takes a unique approach to hospitality that aspires to tap into a deeper level of exchange with guests to create emotional connections. lebua’s award-wining lodging collection includes Bangkok’s best-performing luxury hotels (Tower Club at lebua and lebua at State Tower), three boutique hotels in India (Devi Garh by lebua, Udaipur; lebua Resort, Jaipur; and lebua Lodge at Amer, Jaipur), and an exclusive property in New Zealand (Lake Okareka Lodge by lebua). The Dome at lebua, the group’s collection of restaurants and bars atop its Bangkok hotels, include Sirocco, the world’s highest open air restaurant, designated ‘2011-2013: HAPA Restaurant of the Year’ by the Hospitality Asia Platinum Awards; Sky Bar, named “the most stunning rooftop bar you’ll ever see” by The New York Times in 2013; Breeze, highlighted by USA Today as one of the world’s “10 most cutting-edge restaurants” in 2014; and Mezzaluna, honored as a ‘Foodie Top 100’ fine-dining mecca in 2013. lebua is expanding its dining concepts to Europe through a strategic partnership with Steigenberger Hotel Group, starting with the 2015 opening of Breeze in Frankfurt at Steigenberger Frankfurter Hof, and is exploring hotel management contracts in city and resort destinations worldwide.