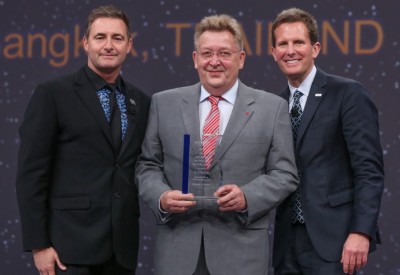 Las Vegas (United States) – April 20, 2015 – One of Thailand’s most experience hoteliers, Klaus Sennik, has picked up a prestigious award at the annual Wyndham Hotel Group brand conference in Las Vegas.

Klaus, GM at the Ramada Plaza Bangkok Menam Riverside hotel, was named ‘2014 General Manager of the Year’ for the South East Asia/Pacific Rim region. He was presented with the award by Wyndham Group President Geoff Ballotti and the company’s regional Managing Director Barry Robinson. Special guests at the three-day conference in Las Vegas were former US presidents Bill Clinton and George W Bush.

“This award is a major highlight of my career and it reflects in part the passion and dedication of our team in Bangkok to pursue the goals and objectives set by the Wyndham organisation. I was deeply moved by this award and by the very kind and sincere words of congratulation that I received from the hotel owners in Thailand. It was certainly an unforgettable honour to attend such an important Wyndham conference in the presence of two former US presidents,” said Klaus Sennik.

“In Bangkok we continue to focus upon environmental issues as part of the Wyndham green programme and we are proud to be successful standard bearers for the Wyndham organisation,” he added.

Klaus Sennik is an enthusiastic member of the Skal International travel and tourism networking organisation and this latest achievement has won praise from Skal’s Thailand President Dale Lawrence. “This award is richly deserved. Klaus Sennik has enjoyed considerable success in promoting the hotel as an attractive and compelling choice for business and leisure travellers. I am sure that all Skal members in Thailand will join me in extending to Klaus our sincere congratulations,” said Mr Lawrence.

Klaus Sennik was appointed General Manager of the Ramada Plaza Bangkok Menam Riverside hotel in 2011. Wyndham is the world’s largest hotel organisation as measured by the total number of properties in its portfolio.