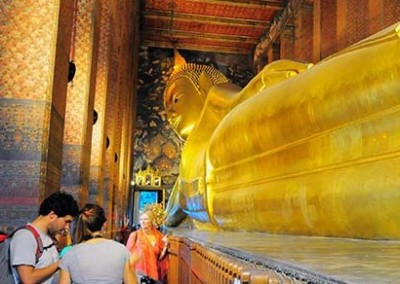 Bangkok (Thailand) – December 21, 2014 – The famous Reclining Buddha image in Bangkok’s Wat Pho was recently listed as one of the 10 most impressive religious statues in the world by CNN Travel. The Reclining Buddha of Wat Pho is honoured for the massive size at 15 metres high and 43 metres long, as well as for the beautiful features. “The most ornate parts are the feet, which are inlaid with mother-of-pearl panels featuring symbols that represent the Buddha, including flowers, elephants and tigers,” the article described.

Six of the statues listed in CNN Travel’s 10 of the world’s most impressive religious statues are found in Asia, while the Reclining Buddha at Bangkok’s Wat Pho has long been regarded as one of Southeast Asia’s most impressive religious icons. The image is covered in gold plating and housed in a Vihan boasting exquisitely painted murals, while the feet of the statue are decorated with 108 auspicious characteristics of the Buddha meticulously picked out in mother-of-pearl.

Mr. Thawatchai Arunyik, Governor of the Tourism Authority of Thailand said, “This recognition will come as no surprise to most visitors that Wat Pho’s Reclining Buddha has been listed by CNN Travel as among the world’s most impressive religious icons. For three hundred years, devotees have paid their respects and they are now joined by over 2,000 tourists a day who come to admire the statue.”

The size of the Buddha impresses visitors, but it is the sense of peace that the statue exudes and the stunning craftsmanship that make it memorable. The Reclining Buddha image at Wat Pho has long been one of Bangkok’s greatest treasures, impressing writers, artists, tourists and pilgrims alike.